The peaceful tranquility of the serene surroundings of Mull will, for the 46th time, be shattered by the piercing, demonic wailing of some of the fastest rally cars in the UK when the Mull Rally roars into action on Friday, October 9. And for the first time, the world famous three-day rally (Oct 9-11) on the Inner Hebridean island welcomes Beatson’s Building Supplies as the title sponsor.
A total of 150 crews from across the UK will tackle the 18 stages and 160-miles of high-speed action on the closed-off public roads normally used by islanders, tourists and farmers.
At the head of the field, there are a number of drivers who will battle for overall victory and podium places in the Beatson’s Building Supplies Mull Rally, supported by EventScotland, a team within VisitScotland’s Events Directorate. 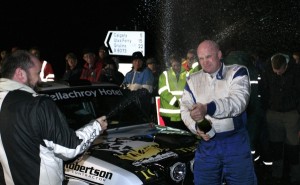 Seeded No1, last year’s winner Calum Duffy, has ditched his all-conquering Ford Escort MkII and replaced it with a four-wheel drive GpA Subaru Impreza. But it won’t be the first time the car has tackled Mull.
“It’s a genuine Prodrive Allstars 555 car,” the eight-time Mull Rally winner from Dervaig explained. “Kenny McKinstry had it for a while, and the car has actually done Mull three times.”
And while some people have questioned Duffy’s decision, some saying it’s “a backwards step”, the Mullean is confident it’ll prove to have been the right decision.
“I’d been competing with the Escort for more than 20 years and it had got to the stage where I couldn’t develop it any further,” Duffy, co-driven by his brother Iain, continued.
“I’m not going to say I was bored with it, but using it every year, it had got too repetitive.
“We’d got to the stage where we were either going to stop, or we were going to have to change. We didn’t want to stop: so we made the change.
“I really can’t make any comparisons until I get it out on a stage that I know, but it’s definitely not as fast in a straight line as the Escort. But it has better brakes, better suspension and it delivers more traction.
“I’d love to be able to come out at the end of the Mishnish Lochs stage and say, ‘that’s as good as it’s going to get’, because I’ve never been able to do that in 20 years’ of rallying.”
But will the change of car alter his approach to the rally?
“Not, not really,” he smiled. “I’ll still just go flat-out basically. It’s Mull. I know it’s a long rally, but you can’t afford to drop any time on any of the stages. I’ll just attack it and go as hard as I possibly can.” 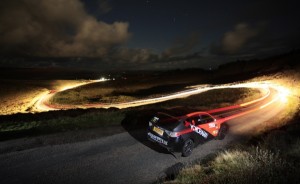 Twelve months ago, Tristan Pye admitted to being “proud as Punch” when he powered his Impreza home in second place. But the Bishop Auckland driver is playing down his chances this year.
“Last year’s result was fantastic, but I’m not allowing myself to get too excited this year,” Pye, who will be co-driven by Invernessian Andrew Falconer, admitted.
“A lot of things have got to fall into place for a result like last year’s to happen, including problems for some other drivers, which of course none of us want.
“Getting into the top three this year will be tough, because there’s a lot of stiff competition. Being realistic, I think it’s very unlikely I’ll win, but I’ll give it a heck of a go.”
Pye, who plans to focus on delivering a good, strong, clean run through the opening leg on the Friday evening before “going for it” on the Saturday, has already starting building a “lightweight Subaru” which he will use on Mull in 2016.
Third last year, Bury’s John Cope returns with his Subaru, delighted that he’s finally got to the bottom — he hopes — of a four-year problem that has plagued his car.
“We’ve had a lot of diff and gearbox problems, and I hope the latest software tweak we’ve introduced will finally get rid of those gremlins,” Cope, co-driven by Blackburn’s Clive Molyneux, explained.
“The problems have plagued us off and on for the last four years, so in some ways it’ll be like having a new car for this year’s Mull Rally.” 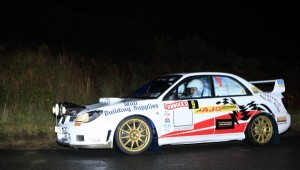 Last year, James MacGillivray had appeared to be the man to beat, clocking fastest times on five of the opening six stages. The Salen driver’s charge though slid to a halt when he went off in his Subaru Impreza on stage 11 at Penmore.
This year he returns — having bought the Subaru Impreza he hired to use last year — and admits he’s feeling more upbeat than 12 months ago.
“We’re making a few wee changes to the car, but the most important is we’re switching to a sequential gearbox,” MacGillivray explained.
“I’ve found that when you don’t get a lot of time in the car, maybe doing one or two rallies in the year, it’s much easier to jump in a car with a sequential gearbox. It’s far easier than having to get used to the idiosyncrasies of a manual.
“Although I haven’t been in the car for a year, I feel I know it; I know what the car’s capable of, and if I can drive the car to what it’s capable of, then I’ll be reasonably confident we can mix it with the top guys again.
“I’ll certainly be far more upbeat starting the rally this year than I was 12 months ago.”
Elsewhere, the entry list just oozes class, speed, precision, determination and experience.
The field includes some of the fastest Tarmac rally drivers around, who annually flock to test themselves on the dauntingly demanding high-speed test that is the Mull Rally.
Richmond’s Tony Bardy returns to action in his Ford Focus, and 12 months after being forced to retire his MkI Ford Escort with fuel-feed problems, Jimmy McRae returns to Mull.
The five-times British rally champ, now 71, will be partnered by his longtime co-driver Ian Grindrod, but this time the duo will drive a Vauxhall Firenza.
“It was such a disappointment to be forced to retire last year, the first time I’d competed on Mull for 40 years,” the veteran rally ace said. “So Ian and I have decided to come back with the Vauxhall and give it another blast.”
Ireland’s Derek McGeehan will cross the Irish Sea to tackle the event in his unique, right-hand drive MINI World Rally Car — it’s the only right-hander in the world — while 17-year-old Ally Currie from Tobermory will return to tackle the event for the second time in his Peugeot 106.
One of the highlights of the event is a change from tradition. Crews will tackle ‘The Long One’ as the first stage of the Saturday night, and in reverse direction from the last few years. The 21.89 miles starts at Dervaig, and heads round Calgary Bay before the fast finish at Torloisk.
The other major change is the finish of the rally’s final stage which will, for this year, be at Tobermory when the Glen Aros and Mishnish Lochs stages are combined to make a 15-mile last test. 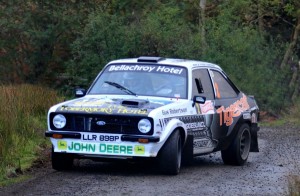 “I think that once again we’ve managed to put together a thrilling and exciting event, not just for the crews who are competing, but also the spectators,” Iain Campbell, Clerk of the Course for the event, explained.
“Of course, none of the weekend’s motorsport activity would be possible without the continued support of the residents of the island.
“They put up with the invasion that arrives during the second week of October every year, and the closure of their roads, with good spirit and a proper Highland welcome.
“Safety, as always, is paramount, and we have worked closely with Police Scotland to ensure the Beatson’s Mull Rally is as safe as possible for the crew and the spectators.”
Paul Bush OBE, Director of Events at VisitScotland, said: “We are delighted to once again be supporting the Beatson’s Building Supplies Mull Rally. The event will provide a wonderful weekend of action and excitement for spectators. Scotland is the perfect stage for motorsport events, and in the Mull Rally we have a thrilling spectacle, set against the stunning backdrop of the island.”

EventScotland: EventScotland is working to make Scotland the perfect stage for events. By developing an exciting portfolio of sporting and cultural events, EventScotland is helping to raise Scotland’s international profile and boost the economy by attracting more visitors. For further information about EventScotland, its funding programmes and latest event news, visit www.EventScotland.org. Follow EventScotland on Twitter @EventScotNews. EventScotland a team in the VisitScotland Events Directorate — the national tourism organisation which markets Scotland as a tourism destination across the world, gives support to the tourism industry and brings sustainable tourism growth to Scotland.