Celebrating the half century of Britain’s most popular and arduous event, the route and the rally certainly lived up to their billing. The island was packed with visitors throughout rally week, providing local businesses with a timely post-season boost. And those visitors witnessed a classic island fight.

Running a Hyundai i20 N Rally2 for the first time, MacKinnon took Friday evening’s six stages to settle into the new car. Feeling more confident with the set-up for Saturday afternoon, he pushed harder and began to take time out of last year’s winner Daniel Harper.

Lancastrian Mini JCW WRC driver Harper continued where he left off 12 months ago, reeling off the fastest times to build an early lead. His hopes of a second consecutive and third event win in total were dashed when he dropped time in SS12. The Mini stalled, forcing him to power-cycle the car at the cost of 45 seconds.

Nothing, however, could be taken for granted after the organisers planned a brutal sting in the tail of this year’s route. Shortly before 10 o’clock on Saturday night, the crews departed for the final leg of the event – and a 31-mile stage from Lock Tuath, through Calgary and down Glen Aros.

And that long stage almost turned the rally on its head as MacKinnon suffered brake problems and a water-related issue which cost his Hyundai power. Harper closed the gap to 15 seconds, only for the leader to double that advantage on the shorter Ben More and Scridian tests.

One stage to go and Harper piled everything on, pulling 26 seconds out of MacKinnon in the final 14-miler. He came up 8.4 shy of a third win.

It had been an absolute thriller.

Talking at the finish, winner MacKinnon admitted the longest stage in the history of the closed-road Beatson’s Building Supplies Mull Rally had taken its toll.

“It was tough,” he said. “We lost the brakes and then we had the water temperature thing, it was really distracting – I was talking to Paul [Beaton, co-driver] and putting him off. We took some time back on the next two, but then we really had to manage the brakes in the final stage. When we came to the finish line, I knew it was going to be close. We’d just about done enough. What a relief and fair play to Daniel – he’s driven really well.”

For Paul and co-driver Paul Beaton, there were a few hours well-earned rest before Sunday afternoon’s parade through the centre of Tobermory. Main Street was, as usual, packed as the crowds gathered to welcome their local heroes.

MacKinnon’s win takes the family tally to 16, with his father Neil having won 12 times before.

Second place was bitter-sweet after their victory last year, but Daniel Harper and Chris Campbell were pleased to bring the Mini home in one piece after a big Friday night moment and typically changeable Hebridean conditions.

“When we were sideways in fifth gear on Friday night, I honestly thought we were heading for the trailer and home,” he smiled.

“It was a good event – it’s always a good event here on Mull. It’s such a challenge. Am I disappointed? Of course, you come here chasing the win and we came close. Losing by eight seconds is tough when we dropped 45 with the stall on Saturday afternoon. That’s the sport, that’s the way it goes sometimes. We’ll be back.”

There was another battle royal for the final podium place with John MacCrone (Ford Escort Mk2) and Dave Wright (Ford Fiesta Rally2) separated by 19 seconds going into the final loop.

An inspired run from MacCrone secured a class win and stunning third overall.

His rival said it all as Wright smiled: “To do what he’s done in a Mk2, fair play…”

Stephen Thompson and Larry Higton finished fifth overall and took class C in their Escort, while Neil Roskell rounded out the top six on his Mull debut, with Andrew Roughead alongside in his Ford Fiesta R5. 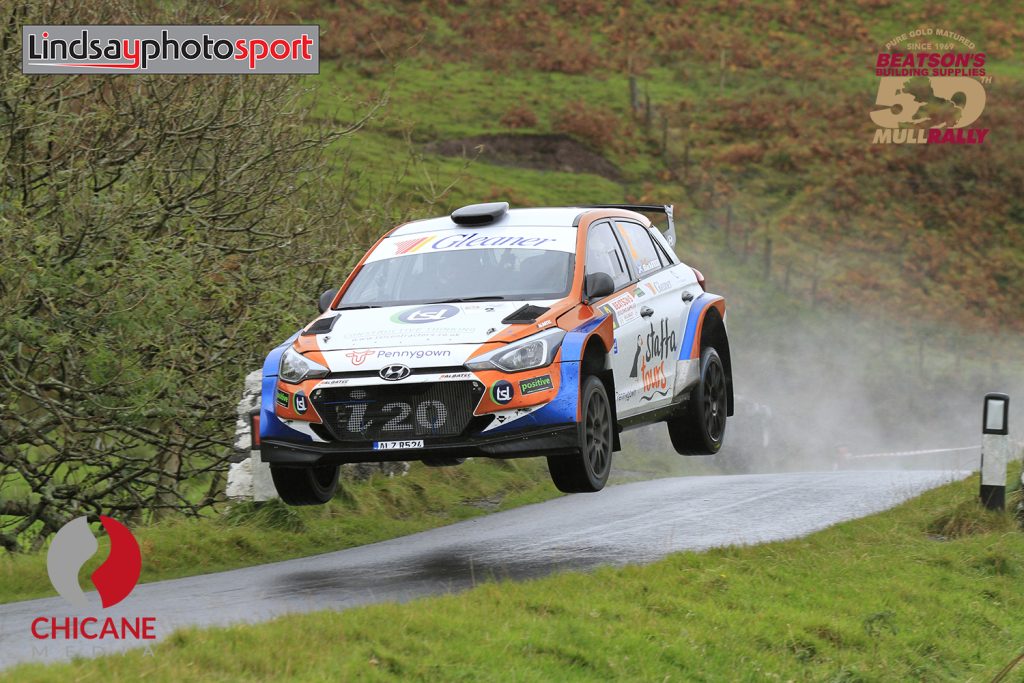