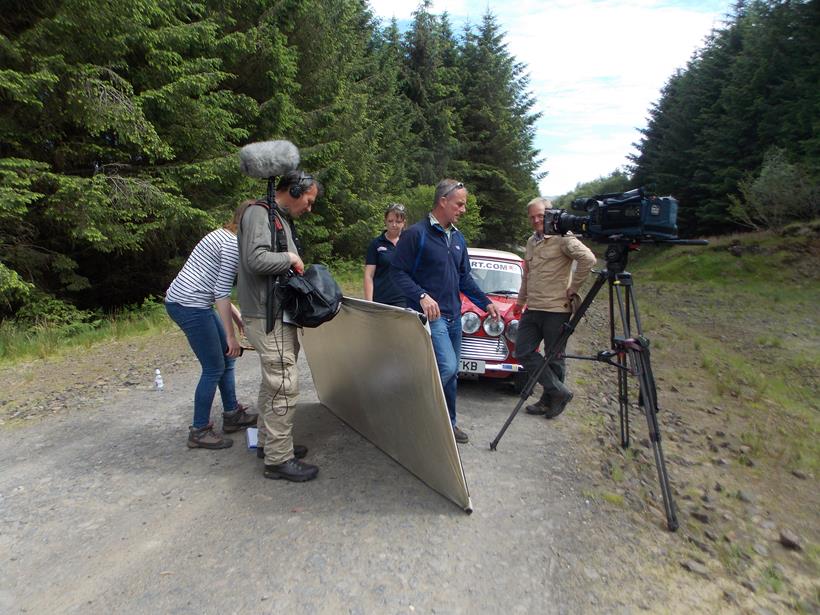 ‘Diddy’ Dave is a stunt stand-in for Jodie Kidd 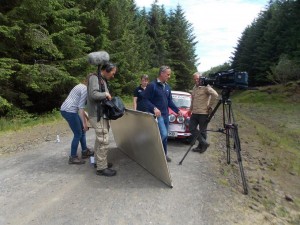 Marie Curie Nurses are the official charity of the 2014 Tunnock’s Mull Rally.  Here local nurse, Louise Thomas keeps us up to date with what has been happening with her and her MINI.

The Marie Curie Mini has been very busy in the lead up to this years Mull Rally.  It has spent time recently  filming with presenter Paul Merton and his crew.  Filming for the BBC programme Grand Tours of Scotland.  This should be aired around October time.

Next the Mini was asked to appear in a feature programme for The Classic Car Show called The Monte Mini.  This was a honour! To have the Legend Paddy Hopkirk drive your car, and to feature alongside the famous Mini 33 EJB.  Alongside Paddy was model and TV star Jodie Kidd and a great days filming was had by all. This will be aired in the near future.

Paddy drove my car with Jodie co-driving and Kevin Furber, who was a works driver for Peugeot did the high speed stuff. There was lots of filming and interviewing with Paddy.

I’ve attached a photo of Dave with Kevin.  Dave was the stunt double for Jodie!! if you zoom in on the suit you can see her name. She is a little taller than him!

The Mini is now on its way back to Mull to get its new Marie Curie decals put on and so we can attend the Mull Rally Fun Day on the 13th of July.

If anyone would like to sponsor this car competing in this years event in aid of Marie Curie Cancer Care, Contact Louise Thomas 07770 962804 or louisethomas529@btinternet.com