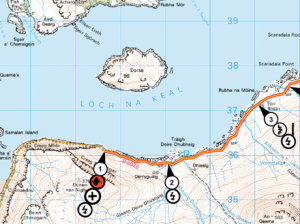 Late in 2015, Clerk of the Course Andy Jardine, outgoing Clerk Iain Campbell, and Deputy Clerk Iain Urquhart, had a deep conversation over the 2016 route … ok, it involved a curry house and a few bottles of wine, but here it is for you.

You will see there are a few alterations — most significantly at Gribun Rocks — but in essence the 2016 route builds on the stages which were planned for the event last October.
Due to the tragic circumstances which caused the 2015 event to be stopped early, we never got to run two-thirds of the planned route. This year’s rally will see us deliver what we promised in 2015, but with a couple of changes.

The first change is the reversal of SS5 Glen Aros/Calgary Bay. It has always been a bit tight to get the end of the competing field down SS2 Loch Tuath before we have to send the Safety Cars up that road for SS5. To release some of the pressure on this, SS5 will go up the Glen, round Calgary and finish at Torloisk before coming down Loch Tuath non-competitvely.

Second are the changes to the stages around the Gribun Rocks. Taking safety — which has always been our primary consideration — into account, this stage has been shortened in both directions. There are more details of these changes below.

The Mishnish Lochs stages will start and finish, as last year, closer to Tobermory, meaning the Glengorm crossroads are used competitively. This also means we can continue to look to grow the RallyFan area around this site for all fans and families.

The 21.89 miles of The Long One will start the third leg on Saturday night, while the Glen Aros/Achnadrish final stage will mean the event finishes almost in the centre of the island’s capital, Tobermory.
Once again, in its 47th running, the Beatson’s Building Supplies Mull Rally will provide a real challenge to competitors on the best roads, amongst the best supporters, on a unique rally-welcoming island.

The three special stages that take in the section known as ‘The Rocks’, along the Gribun section of the island, have all been shortened in 2016.

These are SS4 Knock 1, SS8 Knock 2 and SS16 Ben More. SS4 & SS8 will now both start at the exit of ‘The Rocks’ section as competitors head north. SS16 will stop just before they enter this section.

The decision was made following a visit to the island, in October 2015, by the MSA as part of their investigation into the fatal accident on the Loch Kinloch stage. This part of the Gribun group of stages follows the outlines of the cliffs, has a small retaining wall and then a drop into the Atlantic Ocean. It will come as no surprise to you that the ocean is significantly deep at this point.

There has been an instance, on another event, of a car going off into deep water where the co-driver survived but the driver didn’t manage to get out of the car.

We may have rallied over this section of the island for 46 years, but when you take all emotion out of it, if a car went off here on one of the night sections there is a very definite risk we would be unable to come to the rescue of the crew in time. Everyone knows it is a very, very fast section of the whole route.

We are grateful for the support of the MSA in assisting us with this decision, and their subsequent visit to the island to view the other special stages.

And while we also accept that in some quarters the decision over the Gribun Rocks may prove unpopular, we strongly believe it is the right decision for the future of the event.

Full details can be found on the Route page.