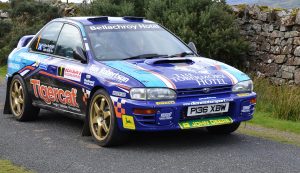 A record-equalling 150 crews will tackle this weekend’s (Oct 14-16) 47th running of the Beatson’s Mull Rally, which brings some of the quickest rally cars in the UK to the fast, narrow roads of the Inner Hebridean island.

The crews will tackle the unique challenge of the island event, which includes two night-time stages and is fought out over three days, starting in Tobermory on Friday evening (Oct 14). Ahead of the crews will lie 18 special stages covering 150 miles of tarmac roads, before the ceremonial finish back in Tobermory on Sunday.

At the head of the field there are a number of drivers who will battle for overall victory and podium places.

Seeded No1, nine-time winner Calum Duffy, who last year ditched his all-conquering Ford Escort MkII and replaced it with a four-wheel drive GpA Subaru Impreza, debuts a one-off Skoda Fabia S2500. And Duffy is quick to highlight the strength-in-depth of this year’s field will ensure the competition will be tougher than ever.

“The entry on Mull this year is the most competitive in many a year,” the Dervaig driver said. “There’s Paul MacKinnon in his new S14 Subaru, which is the best car on the entry; John MacCrone in a Ford Fiesta R5, with massive amount of seat time and an outright win in a Scottish Rally Championship round; plus several other past winners throughout the top 10. “It’s going to be very hard to pick a winner, which is what we relish and why we take part.”

Double Mull winner Paul MacKinnon returns with a new charge for the event, an S14 Subaru Impreza, and though — like many local drivers — he’s playing down his chances, he will carry the tag of ‘favourite’ which a number of the leading drivers have bestowed upon his shoulders. And there’s a link to a past success in MacKinnon’s plans for 2016.

“I’m hiring the Subaru from Kenny McKinstry Motorsport,” the Tobermory man explained. “In 2011 I used a car supplied by Kenny, and I won the rally. Then I took a five-year break from rallying. Last year I did it again in the MkII Escort, and this year we’re trying in Kenny’s car again. “It’s something I know a bit better, having owned a Subaru in the past. This one is more modern; this one is a good machine and let’s face it, I feel I need all the help I can get.”

MacKinnon, meanwhile, believes the Dervaig duo, Duffy and 2013 winner MacCrone, are the men to beat. MacCrone though, who won the Grampian Stages Rally, a counter in the SRC, earlier in the year, admits he’s lacking time on tarmac.

“I haven’t rallied on tarmac since Mull last year,” MacCrone admitted. The Scottish Championship has been all-gravel, so I’ve been powering through the forest stages this year. The first stage — MishNish Lochs — will be by first tarmac stage for 12 months.

“I’ve got Uddingston’s Stuart Loudon co-driving with me again this year, so it would be great to repeat the win of 2013. We’re in a Fiesta R5, prepared by Dom Buckley: it’s the car Alastair Fisher has been using in the Irish Tarmac Championship, so both Stuart and I are looking forward to it.”

And for the first time, this year’s Beatson’s Mull Rally is being overseen by new Clerk of the Course, Andy Jardine.

“It’s a huge privilege to be Clerk of the Course on the Beatson’s Mull Rally,” Jardine said. “It is testament to the strength of the event, the volunteers who put it together, and the competitors, that within 12 hours of entries opening in August we had received 177 applications for the 150 entries available.

“For the second year since 2009 we are back at a capacity entry and hopefully this will continue for the foreseeable future. We need this strength in numbers to be able to make the event work.”

This year’s event is the first since co-driver Andi Mort succumbed to the injuries he suffered 12 months ago in the accident on Saturday afternoon. Last year also witnessed the death of Chris Lawson in the lead-up to last year’s event due to a medical condition.

In the wake of those two tragedies, the family that is the Mull Rally came together in a way never before seen in rallying, and sent a powerful message of solidarity to world motorsport.

This year we celebrate the return of the rally to the island, but the memories of Andi and Chris will always be with us. Let us remember them with a smile and enjoy the action: it’s what they would have wanted us to do.