Since then early June when the bad news broke, the organising team have been beavering away behind the scenes, trying to put on alternative motorsport events for the weekend of 13th – 15th October. Every kind of motorsport has been considered, the feasibility & attractiveness of each one investigated and the operational & safety aspects discussed with the MSA. We have had extensive discussions with dozens of landowners and users, all of whom have been supportive.

We are very grateful to all of you who have offered suggestions, knowledge, experience, time, resources and more. It is very encouraging to see the high standing that the Mull Rally, the Isle of Mull and the people of Mull have in the rallying community.
We are also very grateful to Beatson’s Building Supplies for their unstinting support during this difficult time – without them, new events might not be possible.

The main objective we have worked towards has been to put on a weekend that the usual Mull Rally visitors would enjoy – whether as competitors, volunteers, sponsors, local businesses, or spectators. The social side will come, but we wanted to establish the sporting side as early as possible.

Now we are at the point where we can present three possible events, and we would very much like your feedback on them. These three are more than ideas, there are detailed feasibility checks behind each and landowner engagement. We are hoping that we could put two of these, but that will be confirmed if and when we get the landowners’ agreement and MSA Permit(s).

But it’s only worthwhile doing so if we get enough competitors and general interest to make it worthwhile. So please send your feedback by email to duncan@mullrally.org

So here they are: 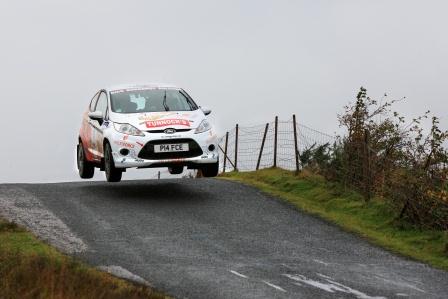 Tunnock’s Mull Rally Update — SS14
The opening stage of the final loop tonight saw John MacCrone top the timesheets through the 14.79-miles at Glen Aros/Mishnish Lochs. Powering his two-wheel-drive Ford Fiesta, the 22-year-old was 24s faster than the Escort MkII of rally leader Calum Duffy.
MacCrone’s pace eased him into second place, 7s ahead of the Nissan of Tony Bardy, with the Subaru of John Cope in fourth with Lewis Gallagher fifth in his Subaru.
But the stage saw a number of retirements, with Car 22, Chris Haigh offroad at Post 9. Crew ok. Car 16, Billy Bird, also stopped in stage at Post 7 with a broken driveshaft … near Dervaig graveyard.

QUOTES:
AFTER SS14:
Car 1, Calum Duffy, Ford Escort MkII, (Dervaig): Took it quite steady. Went for slicks and we had a few moments in there which weren’t necessary. Very slippy, but still going 90-95%

Car 10: Tony Bardy, Nissan Sunny GTi-R, (Richmond): Very slippy in there. Time to kick myself up the arse.

Car 7: John MacCrone, Ford Fiesta, (Mull): Went on Inters, but they went halfway through, which made it hard through the glen. I think we’ll change to Slicks. Think we took some good time out of Tony.

Car 8: Jonathan Mounsey, Mitsubishi Evo VI, (Settle): Just caught Eddie O’Donnell at the end of the stage. He was crawling.

Car 9: Lewis Gallagher, Subaru Impreza, (Tobermory): Quite fast, but we had a slow start. Running Slicks with a couple of cuts.

Car 5: Eddie O’Donnell jnr, Ford Escort RS, (Tobermory): Puncture on the back right and we were down to the rim for the last half-mile. Definitely wanted to get the full value of the tyres. Got overtaken by Jon (Maunsey), so we’ve dropped at least a minute.

Car 32: Ian Chadwick, Honda Civic: Not very happy. Lights are back to flickering, which makes it difficult to see.

Car 20: Stephen Lockhart, Mitsubishi Evo, (Oban): Broke a driveshaft coming up to the Dervaig Hairpin. Only ourselves to blame. That’s it over for us.

Car 26: Alex Taylor, Subaru Forester: We were close behind the No37 Escort that hit the bank. Hampered us a bit.

Car 86: Andrew Smith, Ford Escort MkII, (Northallerton): It’s hot and sweaty in here. I’ve been trying a bit too hard: not smooth. Looking in the mirror too much because I’m conscious of all these 4x4s behind me.