Special Stage presenter, Kirstie Marshall give her thoughts with a quick preview. 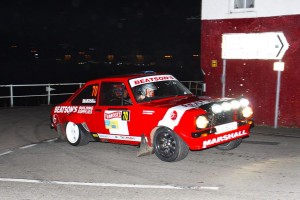 This year’s rally is gearing up to be the most competitive yet with 150 crews taking to the stages. The newly revealed entry list certainly has generated a lot of interest from the rallying community. Over 160 stage miles of narrow, challenging roads will face the crews both old and new, but who are the ones to watch this year?

Local Island favourite Calum Duffy will lead the way on Friday night aiming to make this year his ninth win, competing in a new car this year will not hold the talented driver back. John MacCrone is a very late re-addition to the entry list with a last minute deal to run a TEC Sport Subaru. Following behind is Mull regular Tristan Pye who documented just how determined he is to win the event finishing second overall last year. Car four has always been close to finishing high in the event with a few podiums under his belt, John Cope will be aiming to make this year his best finish yet. James MacGillivray, from Tobermory is also another contender for a win and has proved this over previous years. As all top five seeded drivers will be competing in a Subaru, will this be the car to win the event?

Returning to the Island this year is spectators favourite, Jim McRae paired with iconic navigator Ian Grinrod. Another popular car last year with the spectators was Derek Mcgeehan who managed to achieve two stage wins.

As always there will be a tough battle between the two wheel drive crews who could also be in with a shout of a podium finish. Daniel Harper won the event in 2002 competing in a Mitsibushi Evo and since then has been climbing back up the leader board in his self built Mini Cooper. Despite crashing out of the 2014 event on the last stage, Doug Weir proved his pace and was in with a shout of achieving a podium finish so they will be aiming to repeat the pace they had last year.

This year’s entry filled its capacity within 36 hours of opening proving to be one of the most popular events of this year’s calendar. With under two weeks to go crews will be doing their final checks before heading over to Tobermory for the 46th annual Mull Rally.

Special Stage will be filming the rally for broadcast on Motors TV in November.