Twelve months ago, Salen’s James MacGillivray looked like the man to beat, setting fastest times on five of the opening six stages. But his charge slid to a halt when he went off in his Subaru Impreza on stage 11 at Penmore. This year, he tells Jim McGill, he returns even more upbeat than before. 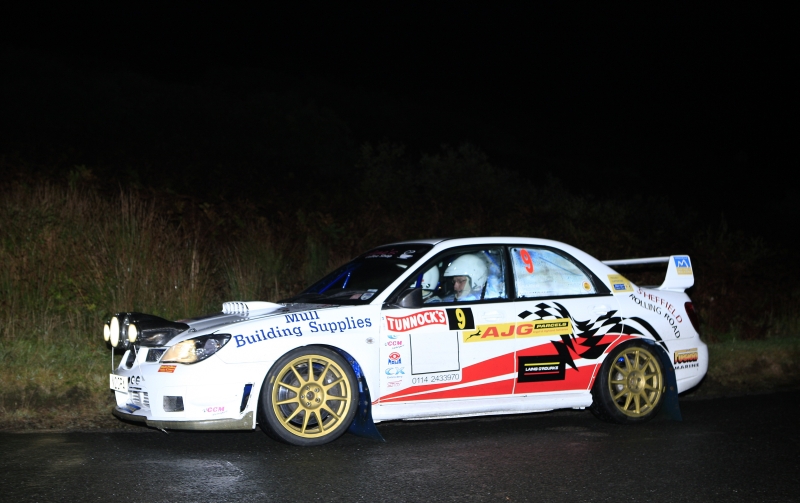 Jim McGill: How are your preparations going?
James MacGillivray: We’re waiting for a new gearbox coming from the Czech Republic: I think it’s actually now down with the car in Selby, where it’s being prepped, so we’re getting there.
The car I hired last year, I subsequently bought, so that’s what I’ll be running this year. We’re making a few wee changes, but the most important thing is we’re switching to a sequential gearbox.

What additional benefit do you feel the changes will give you?
What I’ve found is when you don’t get a lot of time in the car, maybe doing one or two rallies in the year, it’s so much easier to jump in a car with a sequential gearbox. It’s far easier than having to get used to the idiosyncrasies of a manual.
I’d been in the Escort for five years, and that had a sequential ‘box, so I took really badly to the manual last year. I don’t know how many missed gears I had.
I need as many seconds as I can get, so the sequential ‘box will definitely help.

That said, you flew through the first six stages last year.
Oh, aye, it went really well for me last year in the wet. There’s no question about it. Again, it’s also all about the other guys and what cars they have, because it’s all about how they maximise what they can get out of their cars.
But we had it under control totally. Ok, we were slightly behind going into Calgary Bay, and we just touched the gravel and that was the end of that.
But we all know that anything can happen at any given time. It was just unfortunate it happened for us where it happened.

But am I safe to assume your approach from the start of last year’s Mull to the start of this year’s hasn’t changed?
No, definitely not. In fact I’ll be far more upbeat starting the rally this year than I was 12 months ago. Although I haven’t been in the car for a year, I feel I know it; I know what the car’s capable of, and if I can drive the car to what it’s capable of, then I’ll be reasonably confident we can mix it with the top guys again.

Clearly you’re looking forward to getting out again?
I would say I was: definitely. The big issue just now is getting tyres: getting good tyres without having to pay the Earth. It’s virtually impossible. Of course, we need the best, and want the best, so we end up having to pay for them. There’s no alternative.

Will you have a chance of having a shakedown?
I’m not sure. We might go down to Yorkshire to give it a test. But trying to find a date when everyone’s available is proving to be difficult.
We might go to the Rest and Be Thankful the weekend before, but that means getting the guys to come up from Yorkshire with the car for a day, and then go back down again, only to turn round to come back up to Mull for the event. And that’s all money.
We’ve no shakedown on Mull this year, which is a bit of a pain to be honest. We fought quite hard to get a shakedown, but it didn’t work in the end. But we’ll be fine.